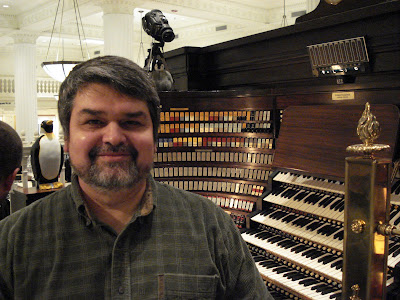 You're looking at a small part of the console of the largest operating pipe organ on the planet, and a National Historic Landmark - the Wanamaker Organ. Oddly enough, this truly majestic instrument is not located in some grand cathedral or concert hall, but in a department store in Philadelphia - specifically, in the seven-story Grand Court of Macy's, formerly Lord & Taylor's, formery Hecht's, formerly Wanamaker's. Amazingly, the organ has been scrupliously maintained throughout it's history, with each corporate entity committed to it's upkeep. Just as the Golden Gate bridge is continuously being repainted, the Wanamaker organ is continuously under maintenance. Two curators work full time to keep the instrument tuned and in working order.

After enjoying a performance, my friends and I visited with the organist at some length, along with a pair of travelers from Cambridge England. As I left, I signed the guestbook - "Randy Roach, Fate Texas". As the lads from Cambridge were leaving, I saw them laughing and pointing at the guestbook, and even photographing it. Apparently they found my name quite amusing. This wasn't surprising because I'd had similar reactions when I visited London in the late 70's, but I admit it does bother me just a little.