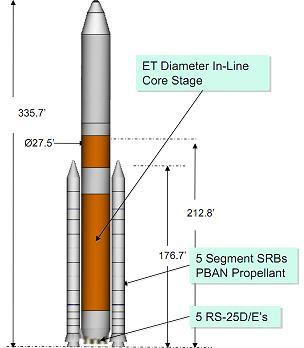 Obama wants to kill manned spaceflight, but Congress has other ideas.

The Space Launch System (SLS) is often derisively referred to as the Senate Launch System, since it was mandated by Congress in the NASA Authorization Act of 2010 in response to Obama's cancellation of Project Constellation.

SLS consists of a Shuttle-derived Heavy Lift Launch Vehicle (HLV), capable of lifting between 70 and 100 tons into low earth orbit (LEO),  and a Mult-Purpose Crew Vehicle (MPCV) capable of carrying 4 astronauts on 21 day missions. These vehicles are very similar to the Ares V launcher and Orion capsule from Constellation.

I've seen a lot of people taking potshots at the HLV. They say it isn't necessary for deep space missions because we could launch the components for such missions on existing smaller rockets, then assemble them in orbit as we've done with the International Space Station (ISS). They say we are building an HLV without knowing what mission parameters it needs to support., putting the cart before the horse. Finally, they say that using Shuttle-derived hardware will lock us into 1970's era technology for the next few decades.

It's true that we've pretty much mastered in-orbit assembly with the ISS, but if we had retained a Saturn V class launcher we could have lifted all of the ISS's 500-ton mass in just four launches. Few launches are safer and cheaper. It's also true we don't know exactly what missions the HLV will support, but the idea is to enable a variety of missions, especially those not practical without heavy lift.  As for using 1970's technology, we've continually made improvements to Shuttle components. Evolving a proven system rather than starting with a clean sheet of paper has served the Russians, and probably would serve us just as well.

So I believe a Shuttle-derived HLV is a good thing, even though I think the main concern of Congress in mandating the HLV was political. They want to retain and conserve as much of the Shuttle workforce (and NASA dollars in their districts) as possible. I actually applaud them for that, because it's really individuals that makes the technologies work, and their skill and dedication is too valuable to be lost.

So where do we stand on the "Senate Launch System"?  Well, a decision on the final configuration of the HLV is due in a few weeks.  NASA Administration Charles Bolden has testified to Congress that NASA "can't" build such a launcher. With leadership like his, he may be right. In any event, the so-called Design Reference Vehicle (DRV) will almost certainly be composed of a Shuttle-derived strengthened External Tank (ET), with Space Shuttle Main Engines (SSMEs) at the bottom and enhanced Solid Rocket Boosters (SRBs).

It's also thought that the initial flights of the HLV will be flown with actual Shuttle SSMEs that have been yanked out of the Shuttle orbiters, which explains why the museums will not be getting Orbiters with actual engines in them. Later, the HLVs will probably fly on a new, expendable version of the SSME.

One last note: The entire Crawler Transporter workforce at Kennedy Space Center has been told they are keeping their jobs, so apparently the HLV will be hauled to the pad by the icon Crawlers. Cool.