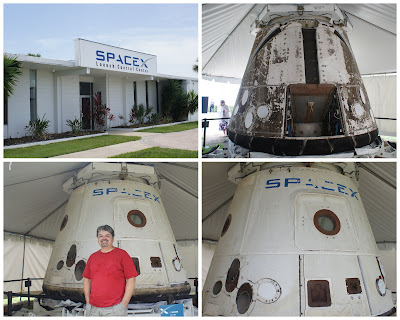 This is me standing in front of the the actual SpaceX Dragon used in COTS Demo Flight 1. The first COTS demonstration flight that SpaceX completed was in December 2010, where it proved that it could launch, orbit and recover its Dragon spacecraft. Prior to that, the maiden flight of the Falcon 9 demonstrated it could launch a Dragon capsule simulator atop a Falcon 9 rocket. Tomorrow's mission will prove that Dragon can rendezvous and berth with the International Space Station.

If all goes well, the Dragon may start delivering astronauts as well as cargo, possibly as soon as 2016. Would you believe you can stack seven astronauts into that capsule? Here's how:

Good luck to SpaceX. It appears private entrepreneurship is our best hope for expanding into the Solar System. NASA's Orion capsule won't fly with a crew for another decade, assuming it survives the budget apocalypse, so to SpaceX and the other COTS competitors - "To Infinity And Beyond!"

You rudely judged me a couple of years ago, therefore...

Sentence: Very bad luck for the rest of your life, then your eternal soul will not be reincarnated as human for 174 years. When you are born-again as human, it will be under very hellish circumstances.

Note: You can repent, publically apologize, do many hours of verifiable community service, and petition this court(77) for a retrial. GOD & the Christ are just & forgiving. However, 17.4 years of your reincarnation sentence is non-commutable and any contempt-of-court will result in an increased sentence.

I strongly recommend that you respect this Judgment. You are now part of a GRAND scientific experiment to last 1,000+ years.