The Computer of the Future? 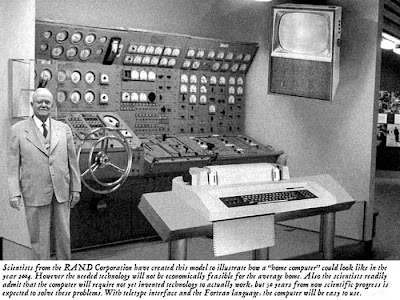 This image and the accompanying text have been displayed in the main conference room of our Information Systems Division for many years. It purports to be taken from a 1954 Popular Mechanics. The text reads :

"Scientists from the RAND Corporation have created this model to illustrate how a "home computer" could look like in the year 2004. However the needed technology will not be economically feasible for the average home. Also the scientists readily admit that the computer will require not yet invented technology to actually work, but 50 years from now scientific progress is expected to solve these problems. With teletype interface and the Fortran language, the computer will be easy to use."

The awkward writing and use of the term "home computer" in what is supposedly 1954 should be a clue that this is a hoax, as is the fact that the first Fortran compiler was released in April 1957. However, the final nail in the coffin came earlier this week when we were meeting with Jim Laricks, an account representative from a company called datadomain. Jim noticed the picture on the conference room wall. Being former Navy, he said "That's not a home computer. That's a Westinghouse 51-W US Naval Nuclear Submarine Reactor Control Panel. I know - I spent seven years in front of one".

So, a quick googling of "RAND home computer" leads to snopes.com and the real story behind this image. It was created for a FARK photoshopping contest using the image below, which is from a Smithsonian exhibition called "Fast Attacks and Boomers: Submarines in the Cold War". 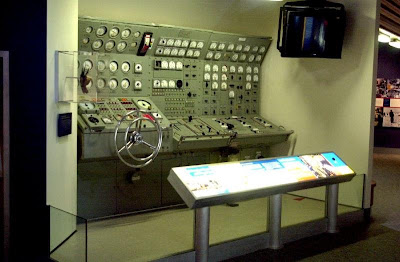 I'm the creator of that picture, and I'd be interested to know in what department of where that image has been on display, so I have that for my records.

Also, the thing about Fortran being launched in 1957 is true, however I would find it likely that people at Rand Corp were aware in 1954 that IBM had initiated development on Fortran already then.

Thank you for comments. I never imagined that I'd would actually communicate with the creator of that picture. Your picture is responsible for a great many smiles!

You're right about Fortran. IBM was was working on Fortran in 1954, and RAND would have been likely to know this.

To answer your question, the image was on display in the Information Systems Division of the Boy Scouts of America National Office, located in Irving Texas just west of Dallas.

If you have records of everywhere your picture has been displayed, is it online somewhere? I'd love to see it.