Autonomous Killbots On The Way? 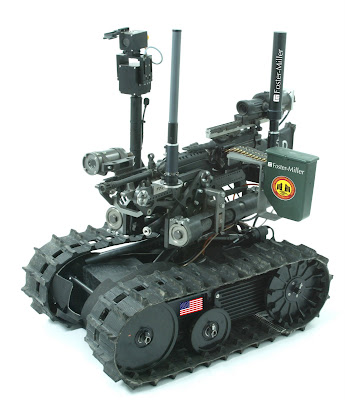 Although completely autonomous unmanned weapons are forbidden, an enterprising engineer at the Naval Surface Warfare Center has found a creative interpretation of the law that would make Bill Clinton or Attorney General Alberto Gonzales envious. Defense Tech reports:

The Law of Armed Conflict dictates that unmanned systems cannot fire their weapons without a human operator in the loop. As new generations of armed robots proliferate, the pressure will inevitably increase to automate the process of selecting -- and destroying -- targets. Now comes the weird part. A new legal interpretation has been proposed within the military to deal with the thorny issue of removing humans from the trigger-end of the killing process. Here's how it works: program all armed robotic vehicles to aim only at weapons, not humans. For example, an autonomous vehicle spots an insurgent with an AK-47. The robotic vehicle is authorized to destroy the AK-47. If the human is killed in the process, that's what's called "collateral damage."

Editorial comment: Supreme Court Justice Earl Warren said "It is the spirit and not the form of law that keeps justice alive." Splitting hairs to avoid the spirit of the law is both common and despicable. Our society is nominally based on the rule of law, but we've become so adept at finding technicalities that pollute and corrupt the spirit of the law, that the law itself become almost meaningless. Perhaps our respect for law has eroded because we have so many. Perhaps it is because some laws are foolish and contradictory. Whatever the reason, the proper response is to change or repeal the law through the legislative process, not to circumvent them.

Let me not be understood as saying that there are no bad laws, nor that grievances may not arise for the redress of which no legal provisions have been made. I mean to say no such thing. But I do mean to say that although bad laws, if they exist, should be repealed as soon as possible, still, while they continue in force, for the sake of example they should be religiously observed.