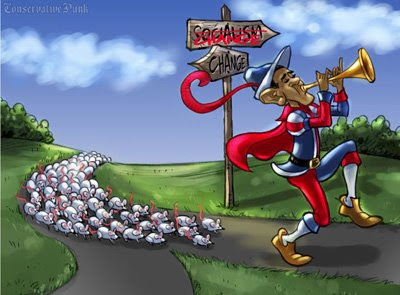 If you've ever questioned just how Obama can give a "tax cut" to 95% of Americans when more than a third of them pay no income taxes at all, an article in the Wall Street Journal has finally explained the magic:

All but the clean car credit would be "refundable," which is Washington-speak for the fact that you can receive these checks even if you have no income-tax liability. In other words, they are an income transfer -- a federal check -- from taxpayers to nontaxpayers. Once upon a time we called this "welfare," or in George McGovern's 1972 campaign a "Demogrant." Mr. Obama's genius is to call it a tax cut.
The Tax Foundation estimates that under the Obama plan 63 million Americans, or 44% of all tax filers, would have no income tax liability and most of those would get a check from the IRS each year. The Heritage Foundation's Center for Data Analysis estimates that by 2011, under the Obama plan, an additional 10 million filers would pay zero taxes while cashing checks from the IRS.
The total annual expenditures on refundable "tax credits" would rise over the next 10 years by $647 billion to $1.054 trillion, according to the Tax Policy Center. This means that the tax-credit welfare state would soon cost four times actual cash welfare. By redefining such income payments as "tax credits," the Obama campaign also redefines them away as a tax share of GDP. Presto, the federal tax burden looks much smaller than it really is.

All it takes is a litte "1984"-style newspeak and abracadabara, Obama has changed enormous growth of the welfare state into "tax cuts". It's genius - diabolical genius.

Having as many citizens as possible dependent on the government is important, both to move the country further into socialism and to insure they maintain political power. This will be reinforced by political indoctrination through Obama's "educational reform" and limiting of opposition via the "hideously misnamed" Fairness Doctrine. The financial crisis will provide an excuse  for nationalization. With control all three branches of governement, this will proceed essentially unchecked.

When Obama says "Change" he damned well means it.