Astronaut To Be Charged With Attempted Murder 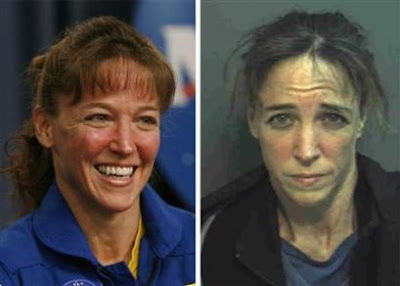 What the hell went wrong with this woman's life? The details in the AP story below are bizarre. If she had succeeded in capturing her victim, I shudder to think of what she would have done.

According to authorities, Nowak believed another woman, Colleen Shipman, was romantically involved with Oefelein. When Nowak found out Shipman was flying to Orlando from Houston, Nowak decided to confront her early Monday, according to the arrest affidavit.

Nowak raced from Houston to Orlando wearing diapers in the car so she wouldn't have to stop to go to the bathroom, authorities said. Astronauts wear diapers during launch and re-entry.

Dressed in a wig and a trench coat, she waited for Shipman's plane to land and then boarded the same airport shuttle bus Shipman took to get to her car, police said. Shipman told police she noticed someone following her, hurried inside the car and locked the doors, according to the arrest affidavit.

Nowak rapped on the window, tried to open the car door and asked for a ride. Shipman refused but rolled down the car window a few inches when Nowak started crying, the statement said. Nowak then sprayed a chemical into Shipman's car, the affidavit said. Shipman drove to the parking lot booth and police were called.

An officer reported following Nowak and watching her throw away a bag containing the wig and BB gun. Police also found a steel mallet, a 4-inch folding knife, rubber tubing, $600 and garbage bags inside a bag Nowak was carrying when she was arrested, authorities said.