What's That Bright Light In The Sky? 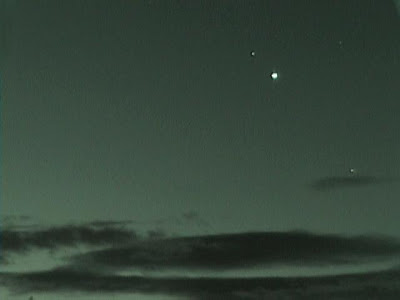 A couple of nights ago I was taking Ellie the Dog outside for a bio-break when I noticed a rather intense light in the western sky. I see a lot of air traffic from DFW airport so I assumed it was an airliner's landing lights, but the light was steady and not perceptibly moving. I watched it for some time and still it didn't move. What the hell was it?

In Project Bluebook, UFOs were often later identified as the planet Venus. I was always a little skeptical of that explanation. Surely no one would misidentify an object which appears in the sky almost every night. Now I understand just how easily Venus could be mistaken for a UFO, for what I was viewing was indeed the planet Venus, so bright that it seemed to be a nearby object.

It's going to be this way for a few weeks, so get out and take a look for yourself. Space.com give this advice:

Check out Venus this weekend and you’ll see it hovering just off to the left of the beautiful Pleiades Star Cluster. With each passing night, Venus will continue to soar higher into the twilight sky, not disappearing beyond the west-northwest horizon until around 11 p.m. local daylight time. On Thursday, April 19, Venus will have company: a beautiful thin crescent Moon will sit several degrees below and to its right. On the following night, the Moon will have shifted to a point well above and slightly to Venus’ left.